In the Thirteenth Century, the great warrior Genghis Khan and his soldiers from the grassed plateau of Mongolia conquered many countries from China to Hungary. They established one of the greatest empires the World had ever known. Legend has it that after a long day of hunting, Genghis Khan and his Mongolian warriors would make camp and prepare extravagant feasts. Using their swords, the warriors would prepare slivers of meats, combined with whatever vegetables and spices on hand. They would grill them on their upturned shields over a blazing hot fire.

This type of cooking has become known the world over as Mongolian BBQ. With this tradition in mind, Kahunas Mongolian BBQ brings you the ULTIMATE MONGOLIAN BBQ . 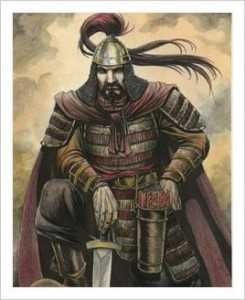